Paintings of the United States 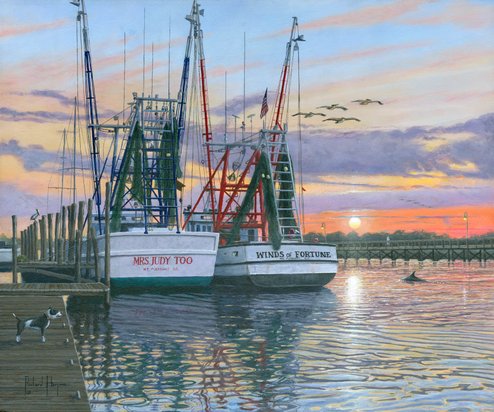 In 2012 my wife and I took a vacation in the USA and spent two wonderful weeks visiting several old friends that we had made when we lived in South Carolina in the 1990s.

During our stay we visited Charleston, South Carolina with some close friends and stayed in a large resort hotel in Mount Pleasant, which is just east of Charleston Harbour across the Cooper River. As the base for the local shrimp boat fleet, Shem Creek is the place to go for fresh sea food. We ate a superb meal at ‘RBs’ and spent time enjoying the view of the numerous small watercraft and kayakers cruising along the creek.

That evening, I decided to take some photographs of the shrimping boats and these are what I used as references for this painting. As is often the case, the sunset was spectacular and this view was just begging to be painted.

The two boats shown in this painting are well known in the area. In addition to fishing, ‘Winds of Fortune’ also takes tourists on harbour cruises.  ‘Mrs Judy Too’ is a 70ft boat named after the owner’s wife. Shrimping is becoming increasingly hard as the locals compete against cheap farm-bred imports and the fleet gets smaller every year.  The fear is that these interesting boats may no longer be around in another few years’ time, which would be a real shame.

Despite the heavy river traffic, the creek is a magnet for wildlife. There are pelicans everywhere and I saw a dolphin cruising up the creek one morning, apparently unperturbed by all the small boats. And I understand that you can also see Manatees there during the summer.

My favourite dog Oscar also makes an appearance again, after an absence of a year. He is intently watching the dolphin making its way back out to the harbour.

This painting was selected for exhibition at the 2013 ‘The Artist & Leisure Painters’ Patchings Competition and Exhibition.