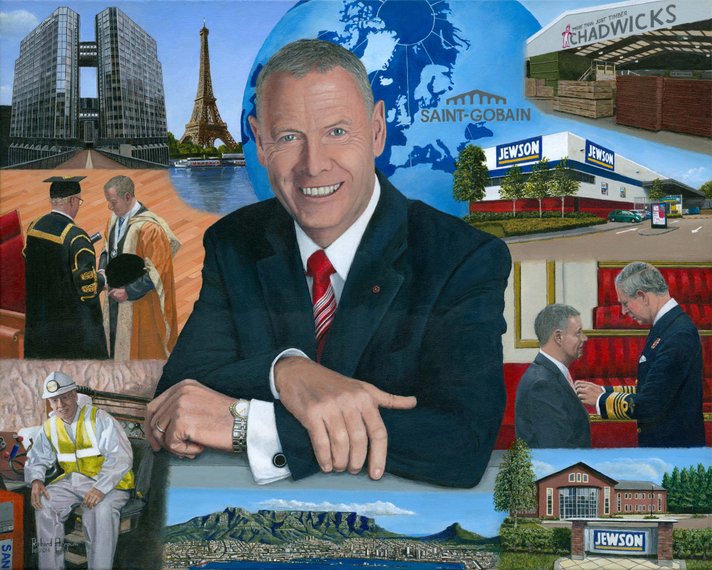 The painting is a montage showing some of the main highlights of Peter’s distinguished career with Saint-Gobain. In the centre is a portrait of Peter and behind him is a globe to represent his current global responsibilities.

He started work in 1970 as an apprentice at Chadwicks and later moved to Jewson, where he worked his way up through the organisation, becoming the Managing Director in 1999. In 2003 Peter became Chief Executive of Saint-Gobain Building Distribution UK & Ireland and led the considerable growth of this sector, more than doubling its turnover and undertaking more than 70 acquisitions during his tenure.

Other highlights shown in the montage are Peter receiving his MBE from Prince Charles in 2009 and also receiving a honorary Doctorate degree from Birmingham University in recognition of his commitment to charitable work through the development of Saint-Gobain's ‘Together' charity programme, which has now raised over £2.3 million for good causes.

Other images in the painting show him down a mine in the UK run by British Gypsum, a Saint-Gobain business, together with an image of Cape Town, in South Africa. At the top left of the painting is Saint-Gobain’s headquarters in Paris, Les Miroirs, in recognition of Saint-Gobain’s foundation in 1665 in glassmaking.