I am a strong advocate for using the Golden Ratio (Phi - 1:1.618) in my paintings.  You may note that the position of the sun or some other key feature or length often fits this ratio.  In some of my works I use several.  I believe that this gives my paintings a better balance than using the more traditional "rule of thirds".

I do not want to bore you with the mathematics associated with phi and the Golden Section but in simple terms, they can be shown in the diagrams below. If you want more information, there is plenty on the Internet.

However, Phi is simply the ratio of line segments that result when a line is divided as shown below.

is the same as

the ratio of the length segment B to the length of the smaller segment C.

This happens only at the point where:

The Golden Rectangle is derived as shown in the diagram below. 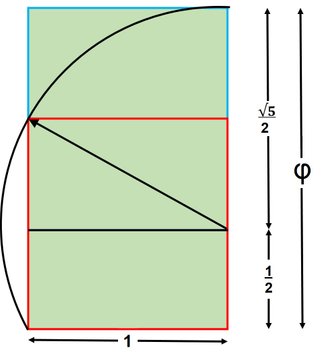 There are numerous claims of how the Golden Ratio appears prominently in art, architecture, sculpture, anatomy, etc. However, some think that these claims tend to be exaggerated. Nevertheless, it appears to have been used by Leonardo Da Vinci (notably in “The Last Supper), Salvador Dali (in his painting “The Sacrament of the Last Supper”, which is painted on a golden section canvas) and several others. It is also used deliberately in industry for the design of logos (e.g. Toyota), automobiles, consumer goods and buildings (e.g., the Taj Mahal and the Acropolis in Athens). Walt Disney produced a fascinating short movie in 1959 called "Donald in Mathmagic Land" in which he explains to Donald Duck the numerous ways the Golden Section appeasrs in mathematics, art and nature.

You can see the extract here: "Donald in Mathmagic Land". It is fasciniating, so take a look.

I am a strong advocate of using golden sections when planning my paintings.  Most of my paintings are riddled with dimensions based on phi. If I am using a reference photograph, I first look to see if there are any elements of it where Golden Ratios can be used. It is often necessary to crop the image, so that phi can be applied. I use a handy piece of software called PhiMatrix (http://www.goldennumber.net/golden-ratio-products/) that enables you to lay lines over an image to see where Golden Ratios may be present. These can be vertical, horizontal, diagonal or spiral.

If I am composing a painting out of my imagination, it is usually much easier to use phi and I tend to make extensive use of it, as can be seen in my painting of “Tommy” below, where I have projected the ratios onto the final painting. 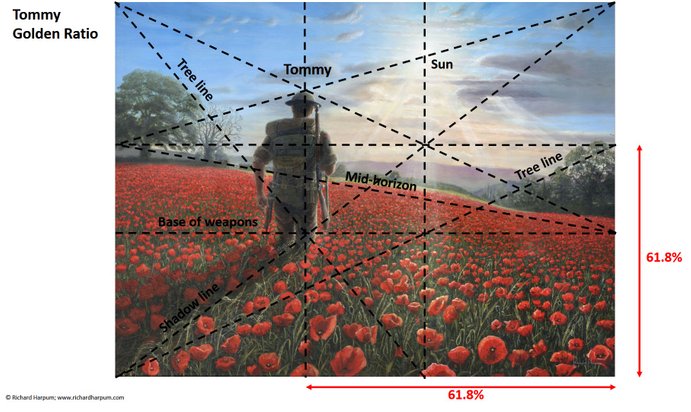 After preparing my 30” x 40” canvas, I marked out various golden sections directly on the canvas. The 61.8% ratio gave two vertical lines approximately 15” in from the sides and two horizontal lines 11.5” from the top and bottom edges. I used the vertical lines to locate the lateral positions of the soldier and sun.  I then drew two diagonal sections and used these to define the positions for top of the soldier’s head and the sun on the two vertical sections.  Finally, I used four more diagonal sections to define the mid horizon, a line of trees on the right of the painting, a large oak tree on the left and the soldier’s shadow.