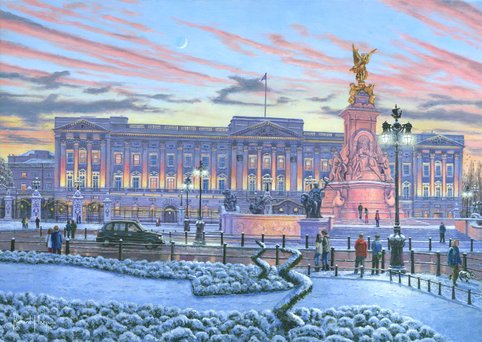 Buckingham Palace has served as the official London residence of Britain's sovereigns since 1837 and today is very much a working building, being the centrepiece and administrative headquarters of Her Majesty, Queen Elizabeth.

Located in the City of Westminster, the Palace is huge with 775 rooms, many decorated with priceless works of art that form part of the Royal Collection. It is the venue for many Royal ceremonies, state occasions, state visits and Royal hospitality, all of which are organised by the Royal Household.

Originally known as Buckingham House, the building which forms the core of today's palace was built for the Duke of Buckingham in 1705. It was subsequently acquired by George III in 1761 as a private residence for Queen Charlotte.  It was enlarged during the 19th century and finally became the official royal palace of the British monarch on the accession of Queen Victoria in 1837.

More than 50,000 people visit the Palace each year as guests to banquets, lunches, dinners, receptions and the Royal Garden Parties. Indeed, I was once fortunate enough to be invited to one of the Garden Parties.

The state rooms, used for official and state entertaining, are open to the public each year for most of August and September as part of the Palace's summer opening. Having done a tour, I can highly recommend a visit.

This painting shows the Palace at dusk in the depths of winter just after a snow fall. The floodlights were switched on, creating some interesting colours on the facade and on the Victoria Memorial in front of the Palace. I must admit before starting the painting, I had not realised just how many windows there are!