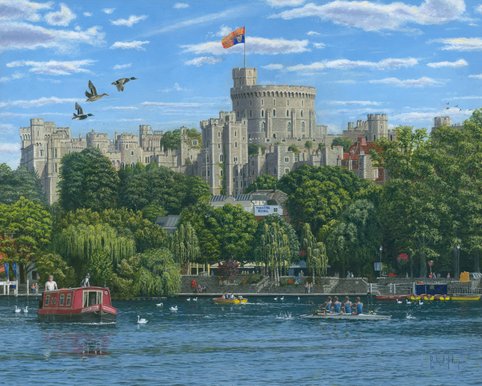 A This painting of Windsor Castle was another jigsaw puzzle commission for Jumbo Games Ltd. Before starting the painting, I visited Windsor and took a large number of photographs both inside and outside the Castle. The Castle tour is fantastic and highly recommended.

The Castle is a royal residence at Windsor in the English county of Berkshire. It is the oldest and largest inhabited castle in the world and has been the family home of British kings and queens for almost 1,000 years. It is an official residence of Her Majesty, Queen Elizabeth, whose Royal Standard (the flag shown in this painting) flies from the Round Tower when she is in residence, which is quite frequently. Windsor is still very much a working royal palace and is used regularly for ceremonial and State occasions.

Not shown in the painting is St George’s Chapel, which is off to the right within the Castle precincts. It is a spectacular building and the spiritual home of the Order of the Garter, the oldest order of chivalry in the world.

The view in this painting is from the banks of the River Thames about half a mile upstream from a large meadow known as “The Brocas”. In front of the Castle is the Theatre Royal and Windsor Promenade. There are a number of boats on the river, including a coxless four rowing boat. There are also numerous mute swans, which are protected and owned by the Crown in the UK. My favourite dog, Oscar, makes an appearance again, riding on the maroon canal boat.  A boat trip up the Thames is also highly recommended.

Windsor Castle from the River Thames