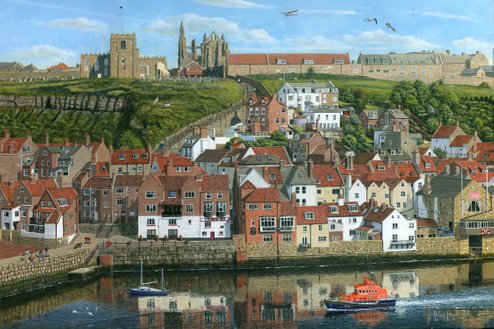 This painting of Whitby Harbour in North Yorkshire, England, was a commission for Falcon Jigsaw Puzzles. The painting shows the ruins of Whitby Abbey on the top of the east cliff, along with the interesting St Mary’s Church. These are reached by 101 steps at the rear of the town. In the foreground are the Duke of York pub and the Board Inn, and the RNLI lifeboat can be seen making its way out to sea.

Whitby is situated on the east coast of Yorkshire at the mouth of the River Esk and has a population of around 13,000, although this swells considerably during the tourist season. It has an established maritime, mineral and tourist heritage and the earliest records show that there was a port there in the 5th Century. The fishing port developed during the Middle Ages, supporting important herring and whaling fleets and Whitby  is where Captain Cook learned much of his seamanship (there is a statue of him on the west cliff above the harbour).

Tourism started in Whitby during the Georgian period and developed further on the arrival of the railway in 1839. Its attraction as a tourist destination was enhanced by the stunning scenery of the North Yorkshire Moors and by its association with the Bram Stoker's horror novel, Dracula. Jet and alum were mined locally. Whitby Jet, which was mined by the Romans and Victorians, became fashionable during the 19th century.

In the 2017 Patchings Art Competition, this painting was Highly Commended and in 2020 was selected for inclusion in the PaintersOnline Virtual Patchings exhibition.