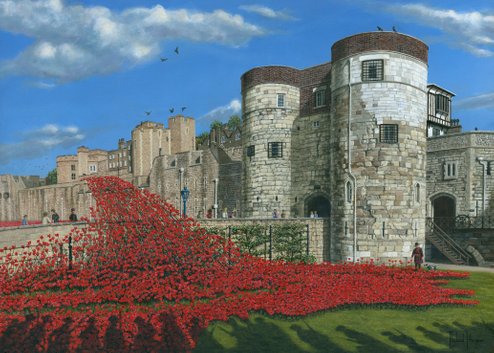 This painting of the Tower of London was a commission for an existing client and used photographic references supplied by her. It shows the massive art installation “Blood Swept Lands and Seas of Red”, which was installed to mark one hundred years since the first full day of Britain's involvement in the 1914 – 1918 First World War. The poppies and original concept were created by artist Paul Cummins and the installation designed by Tom Piper and included 888,246 ceramic poppies installed in the Tower's moat between 17 July and 11 November 2014. Each poppy represented a British or colonial military fatality during WW1.

Although my original reference photos showed shadows of people in the foreground, I have replaced these with shadows of WW1 soldiers, which gives the painting a somewhat “spooky” aura and I hope reinforces the theme of this artwork.

The ceramic poppies encircled the whole castle, creating not only a spectacular display visible from all sides but also an opportunity for personal reflection. All of the poppies that made up the installation were later sold, raising millions of pounds which were shared equally amongst six service charities.

As with many of my paintings, I have made extensive use of golden ratios and somehow my favourite dog, Oscar, has also put in an appearance again.