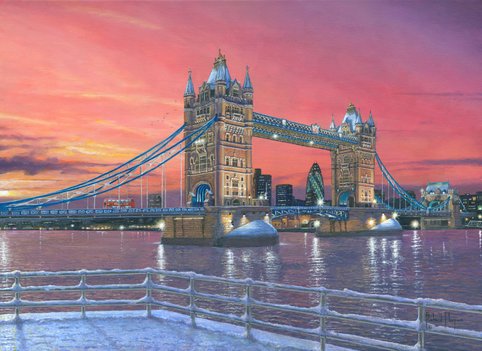 Tower Bridge is an iconic landmark that spans the River Thames next to the Tower of London, from which it takes its name.  This painting shows the bridge at dusk a few hours after a snowfall.

The bridge was built between 1886 and 1894 and is a combined bascule (leaves) and suspension bridge.  It was featured in the publicity for the 2012 Summer Olympic Games in London and a set of Olympic rings were suspended from the overhead walkways.

In my painting, I have used the bridge to frame the famous 30 St Mary Axe building, popularly known as “The Gherkin” and situated in London’s financial district along with Tower 42.  It was designed by Norman Foster and completed in 2004.   Like the Bridge, it is one of my favourite buildings in London.

As in many of my paintings, I have made extensive use of golden ratios, notably with the position of the horizon and key structures.

Tower Bridge after the Snow