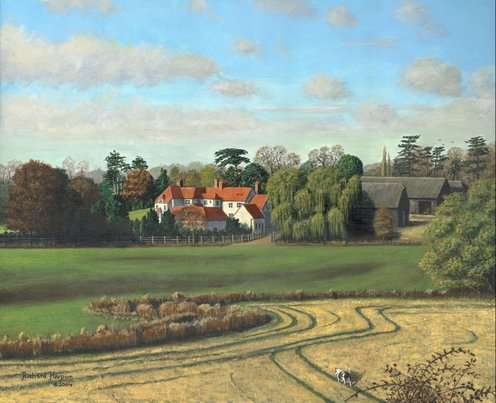 Shearing Hall is a large, medieval manor located in sight of the M11 motorway just east of Harlow in Essex, England.   It has a long history, being mentioned in the Domesday Book.  In the early 20th Century, it was the home of novelist Elinor Glyn and in this century until 2015 it was owned by Iron Maiden bassist Steve Harris.

I used to drive past it on a regular basis and always found it to be a most attractive sight.  One day I made the effort to take a detour and took some photographs of the farm and surrounding fields, which provided the references for this painting.  My favourite dog, Oscar, makes another appearance, this time looking for rabbits.