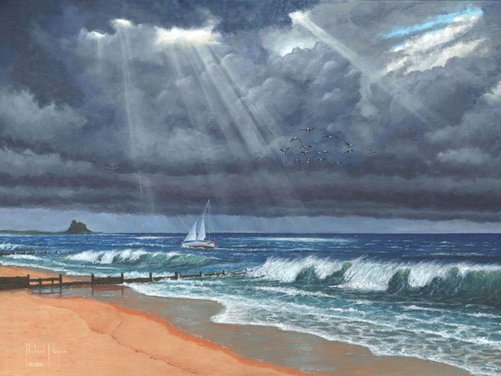 Lindisfarne Castle is perched dramatically on a volcanic crag (called “Beblowe Craig”) on Holy Island off the eastern coast of Northumberland, England near Berwick-upon-Tweed.  It is only accessible at low tide via a three-mile causeway.  It was originally a Tudor fort, but was converted into a private house in 1903 by the famous architect, Edwin Lutyens.  As a National Trust property, it is well worth a visit.

The weather on this part of the British coastline can be ferocious and in this painting, I show the island under a large storm, accompanied by strong off-shore gales.  The composition makes extensive use of “golden ratios” (1: 1.613) in positioning key features, including the horizon, yacht, flock of seagulls and the rays of sun.