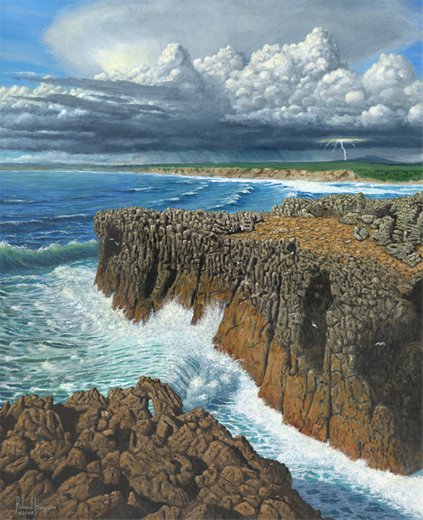 Pontal is located on the Atlantic coast of Portugal about 160km south of Lisbon.  When I visited, there were enormous waves coming in off the Atlantic and breaking on the beach and the cliffs.  At times, the spray reached the top of the cliffs, which are composed of some sort of volcanic rock that had been eroded into jagged shapes by the constant battering of the elements.  The noise as the waves hit the cliffs and echoed into the caves was like thunder.

An added bonus was a spectacular thunderstorm in the distance.  Whilst you could not hear the thunder due to the noise of the sea, I saw several bolts of lightning coming from the storm which headed inland to the east.

This painting took several weeks to complete, mainly due to the complexity of the rocks formations and the clouds.