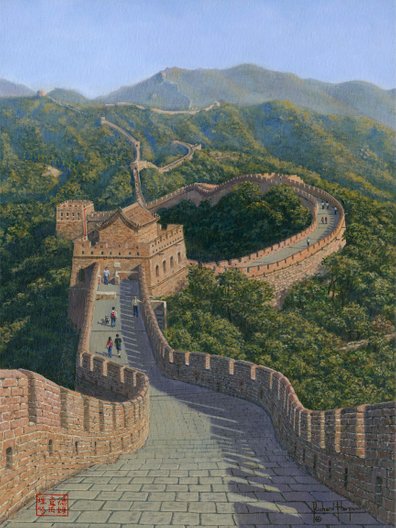 I have visited China many times, mostly on business, and have been fortunate enough to visit the Great Wall three times. My first visit was in 1999 when two work colleagues and I found ourselves in Beijing at a weekend. We decided to visit the Mutianyu Section of the Wall about 60km from Beijing, as it was reported to be less crowded than the nearby Badaling or Juyongguan sections.

Upon arrival by bus, we had the choice of walking up to the wall or taking the gondola. I decided to get some exercise and walk up the thousand-or-so steps to an entrance next to one of the towers. The path was lined with ladies selling cold drinks, which got more expensive the further up I went. Mutianyu’s 2.5 kilometer stretch of the Wall has been very well restored (in the 1980s) and enables visitors to explore 22 watchtowers, which is a much higher concentration than on most parts of the Great Wall. There are also a couple of “tail walls” which jut out from the main wall for additional protection. Some parts were extremely steep, which made me realize that manning the Wall when it was in use during the Ming Dynasty (1368-1627) was probably not much fun.

When we arrived it was very hazy but as the day went on it cleared and we were rewarded by a wonderful evening, which gave the wall a spectacular orange glow.  This painting shows the view looking south from a point a few hundred metres from the main gondola terminal.

Since my visit, a second gondola has been constructed serving the other end of the section. However, when I visited, I decided to take the fast route down using a steel toboggan run that wound down the hillside through multiple hairpin turns. This looked like it would be huge fun but the local staff kept telling me to slow down and about half way down I got stuck behind a lady who was going very slowly.  Maybe next time…

My favourite dog Oscar has made an appearance again in this painting, demonstrating his interest in things historic.

This painting was a finalist in the Artist & Illustrators Magazine Artist of the Year Competition 2013 and was on display at the Mall Galleries in London in January 2014.  It was also selected for display in the Patchings Art Centre 2014 Exhibition. 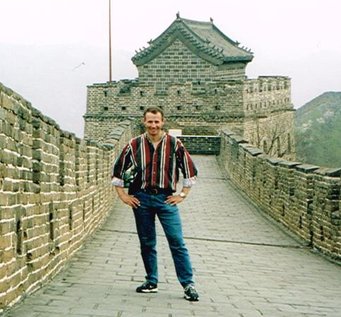 Richard visiting the Great Wall in 1999