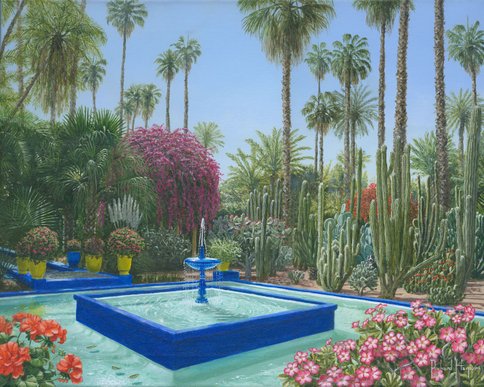 Le Jardin Majorelle is located just outside the medina in Marrakech, Morocco.  It is a twelve-acre botanical garden which was designed and built by the expatriate French artist Jacques Majorelle in the 1920s and 1930s, during the colonial period when Morocco was a French protectorate. A special shade of bold cobalt blue is used extensively throughout the garden and on its buildings and is named after him - Bleu Majorelle.  In 1980 the garden was acquired by Yves Saint-Laurent and Pierre Bergé, who often stayed in an adjacent villa.

In 2014 I visited Morocco, using Marrakech as my base. The visit to the gardens was one of the highlights of the trip for me. Although they are relatively small, they are quite unique with surprises around every corner. I immediately knew that I wanted to paint it, taking numerous references photographs, some of which were used to compose this painting.

Somehow, my favourite dog, Oscar managed to sneak in and can be seen hiding among the cactuses.