I have been fortunate to see a lot of white rhinos during my various trips to Africa over the years. This one appeared as my wife and I were driving through the Kruger National Park in South Africa in 2002.  This was the last of the “Big Five” that we saw that day, staring with leopard, then elephant, lion and buffalo. We had also seen plenty of other game, including Hippos, which are pretty big, as well.

We had to be out of the Park before the gates closed at 6pm. However, this bull sauntered into the road just in front of us and did not appear pleased to see us. I stopped the car and started taking photos. The bull defecated on the side of the road (presumably to mark his territory), stomped his legs and then stood defiantly blocking our route.

Although white rhinos are far less aggressive than their “black” cousins, I decided that it would be best to wait for him to leave on his own accord, rather than try to encourage him to go by driving even closer.   So I just took more photos, which formed the references for this painting. That is a red-billed Oxpecker on his back.

After what seemed like an age, he turned and headed back into the bush, turning to face us again as we drove past. He looked annoyed, so we left quickly.

We reached the park gates at 5.58 pm! I’m not sure what would have happened if we had been late but I did not fancy spending the night in the Park.

It is a tragic thought that within a few years, it is likely that none of these magnificent animals will still be living in the wild due to the misguided belief that their horns have medicinal qualities or because they are prized as dagger handles or ornaments. 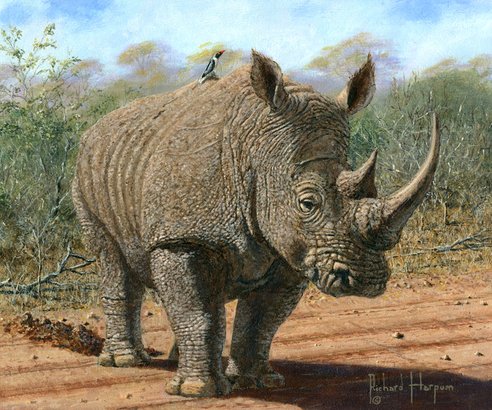