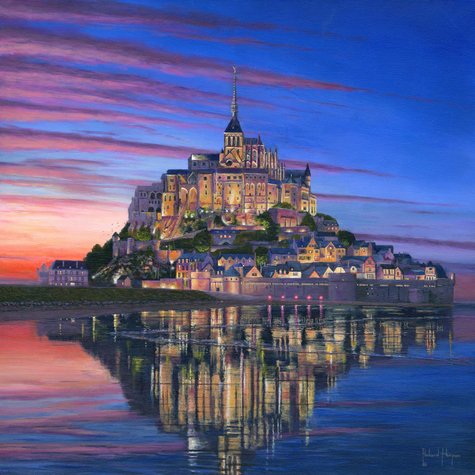 In 2011 my wife and I took a vacation in France and spent a wonderful two weeks touring Normandy with two American friends.

One of the highlights of our trip was a visit to Mont Saint-Michel.   Situated on  a rocky tidal island off the north-west French coast near Arvanches, the fortifications date back to ancient times and since the 8th century have been the seat of the monastery from which the island draws its name. Mont Saint-Michel is a UNESCO World Heritage Site and attracts more than 3 million visitors per year, making it one of France’s most popular tourist sites.

We spent a wonderful day there and I knew before I visited that I was going to paint it. So I took numerous photographs. This is my second painting of the mount and depicts it just after sunset when the floodlights have been switched on. The reflections in the water make it a stunning sight.

This painting was Highly Commended in the 2013 ‘The Artist & Leisure Painters’ Patchings Competition and Exhibition.